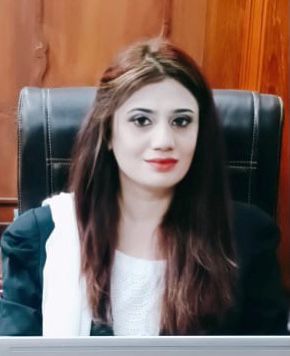 After her early education from Federal Government Girls High School, she had completed her B.Sc (Hons) in Mathematics from Lahore College for Women University, Lahore (LCWU).  Thereafter, in order to promote justice, fairness and morality and to address issues of social injustice, she choose an exciting, intellectually challenging, and rewarding field for herself and completed post-graduation in law from Punjab University. Later on she completed her L.L.M from Superior University by securing first position.

She is the holder of highest award, “The Role of Honor” from LCWU. She remained president of Science Society, President of Debating Society and Secretary of Islamic Society of LCWU. She has won many awards at district, regional, provincial and national level in debates & declamations. She won consecutive debate competitions held by Higher Education Commission (HEC) at national level. She participated with distinction in “Youth Convention” held by the then President of Pakistan in the year 2006. She attended International Labour Conference held in Sri Lanka in 2007 to represent female Youth of Pakistan. Prior to her induction in judiciary, she hosted various programs concerning legal issues at TV channels.

She was enrolled as Advocate Lahore Bar Association in 2010. She became Advocate High Court in 2012.  She remained legal advisor of different institutions/departments/organizations and also rendered volunteer services to different NGO’s working for welfare of women, children, transgender and persons with different abilities. During her regime of law practice, she did many cases pertaining to civil, criminal, banking, services, family and juvenile. Thereafter she was selected as judge through the competitive examination.

She never compromised on her judicial work and on the basis of highest disposal of cases, she was selected among others to attend and represent judiciary of Pakistan in the 14th Biennial Conference “Building Bridges between Women Judges of the World” in Buenos Aires, Argentina, 2018. Due to her marvelous contributions in the establishment of First Commercial Courts in Pakistan, she was awarded certificate of appreciation by the then Hon’ble Chief Justice Lahore High Court, Lahore.

As a student of law, she is keen to upgrade her knowledge. She is the winner of highly venerated “Chevening Scholarship 2022” by the Foreign and Commonwealth Office, United Kingdom and on way to England to study “M.S c Criminology and Criminal Justice”. She believes in hard work and ambitious to promote “education of women with aim”.