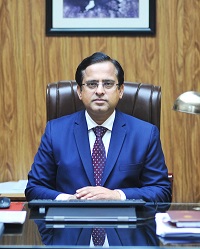 Mr. Muhammad Imran Sheikh is currently pursuing his LLM from the Queen Mary University of London, United Kingdom. He completed his first degree in Law (LLB) in 2001 from the University of Punjab, Lahore. After working as an advocate at Sheikhupura, he was selected as a Civil Judge-cum-Judicial Magistrate in 2004 through a competitive examination undertaken by the Punjab Public Service Commission (PPSC) and stood at the top out of more than three-thousand candidates. While serving as a Civil Judge-cum-Judicial Magistrate, he decided on thousands of civil and criminal cases. He earned certificates of merit for gaining top positions in deciding the maximum number of cases. He was promoted as a Senior Civil Judge in April 2017 and served in this capacity at Dera Ghazi Khan, Nankana Sahib and Gujrat. In this role, he established an ADR Centre at Dera Ghazi Khan. He was awarded a Certificate of Appreciation by the Honorable Chief Justice of Pakistan for rendering meritorious services under the Expeditious Justice Initiative. He was promoted as an Additional District & Sessions Judge in December 2019 and remained posted at Lahore, Pakpattan, and Kasur. This position offered him an opportunity to adjudicate upon a number of Civil and Criminal Appeals, Narcotics matters, and the petitions U/Sec 22A/B Cr.P.C. He was posted as a Senior Research Officer at Lahore High Court Research Centre in July 2021.