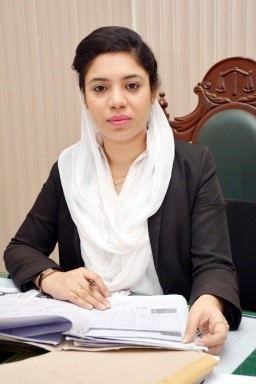 She did her LL.M from National College of Business Administration & Economics and LL.B from Quaid-e-Azam Law College. Cyber crime laws were her area of interest on which she wrote her LLM thesis in addition to getting a one year diploma. She possesses a taste for academic writings; her various articles have been published at different national and International forums. She is Gold Medallist in Intellectual Property Laws. She was among the top five students of law at LLB examination held by Punjab University in the year 2011. She was awarded with Silver medals in Constitutional Law, Transfer of Property law, Administrative Law, law of Equity and Company Law. She also received Bronze medals in Civil law, Criminal law, Islamic Jurisprudence and International Laws. She was also given award for best presenter by Quaid-e-Azam Law College. During her regime of law practice, she practiced in district courts and High Court. She has also worked for Aurat Foundation during that period. She joined Punjab judiciary in 2018 after qualifying competitive examination in her first attempt. She secured 2nd position in Punjab Judicial Academy, Lahore in her pre- service training program of six months. She attended one week pre-service training in Federal Judicial Academy and Sindh Judicial Academy. She also attended training for capacity building of research in Punjab Judicial Academy and 10 days intensive training program for research at Lahore University of Management and Sciences (LUMS). While serving as Civil Judge, she decided a number of civil and criminal cases. While going through an extensive selection process encompassing judgment analysis, written Tests and interview, in August 2019 she was selected as Research officer to be posted at Lahore High Court Research Centre.