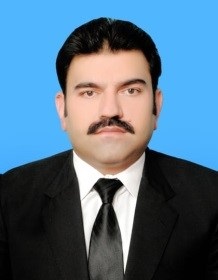 Mr. Muhammad javed Khan was born in Multan and received his early education at Multan. He went on to earn his Bachelor of law from University of the Punjab Lahore and later obtained his Master of Arts degree in Political Science from theIslamia University of Bahawalpur. He was enrolled as an Advocate at Punjab Bar Council in the year 2007 and practiced at District Courts Multan.In 2010, he passed the competitive exam for the post of Assistant District Public Prosecutor held by the Punjab Public Service Commission but did not join as he was also selected as Civil Judge-cum-Judicial Magistrate and remained posted at Bahawalpur, Muzaffargarh, Lodhran& Yazman. During his tenure, he decided number of civil, criminal, family and rent cases. In 2018, he obtained his LLM degree from the Islamia University of Bahawalpur. He remained the member of visiting faculty of BahauddinZakariya University Multan & theIslamia University of Bahawalpur. He attended the different Capacity Building Trainings at Punjab Judicial Academy Lahore and Federal Judicial Academy Islamabad. He also attended the extensive training course of analytical legal research at Lahore University of Management Sciences (LUMS) and is certified trainee from Lahore University of Management Sciences. In Feb, 2019 he was appointed as Research Officer at Lahore High Court, Bahawalpur Bench, Bahawalpur. He has tremendous experience of legal research and teaching.